My life is a Soap Opera

Starting some years ago, I got a crush on someone. Naturally, if not I’d have to call myself an ice block. Now, this someone was a close friend for several years, and I probably knew her better than she did herself - I thought.
Therefore my "crush" turned into a "lost love": She never would accept any relationship, it’s just not ’her thing’. She often told me. Until...

Some day I got to her, walked up the stairs to her flat, applied the key to its lock (she gave me since she’s living downtown, and I’m living somewhat 5 kilometers outside, so I could sleep at hers if I was too drunk), turned it around, and was eyed by some strange Emo-guy, who in this very moment started shouting, like: "Who’s that guy?" and much other blabber. And she came out, "Hi boy, may I introduce you to my boyfriend...".

Quite depressed and embarrased, I just closed the door, and started walking to a Youth Café, where I used to spend my free afternoons. Just there I saw another girl for the first time - which should be the target of my interest some days later. But for now, I just was depressed, and, after not even a full hour and somewhat about 20 EUR spent for booze, quite drunk. So I went to my bands rehersal room, and "wrote" another verse for our song "Doomsday in Paradise", which tells the tales of my lost friendships and loves.

Half a year later, we watched several movies at our Café. Next to me only one person: That girl I mentioned before, whom I didn’t really know, not even her name. We watched Sin City, just out on DVD this day. Remember the scene, when that yellow guy...? Everytime he showed up, she hugged me - out of fear, I assumed. So I did the only thing that came to my mind: Hug her back. She was dressed all in black, just like me. She wore Patchuli, I liked that. From this moment on, my whole world shifted, ideals moved, and - at this moment I knew about ’love at the first sight’. Well, actually second sight - or maybe I ignored it at first?

After the movies were watched, assumingly at somewhen about 4 am, we finally started talking - in order to keep us awake, we said. By 6:00 I saw her home, she had to start working, I had to go to school. In the afternoon we met again, at the Café. She had had quite a bad day, she told me. Everything she did, went wrong – due to staying awake for too long.

The Café closed for this day. "See you next week", I said. "Won’t be there, I’ll have to go to Munich for school, we have block courses there", was her answer. "Then... See you today?" - "I’ll be at my parents, in my hometown... you can come, if you can. Let’s watch some movies, talk a bit?" As we did, then. But I didn’t take the time to drive back home, we just started sleeping as we were lying around each other on the couch. And exchanged phone numbers before I left that evening.

One week later, when she came home from school, I went there again. This time, we took the liberty not to sleep on the couch, but next to each other in her bed.

All in all, we had quite a happy time for some months (but never even went as far as kissing each other), but as the new year came, holidays came. And so did her boyfriend, who had been studying somewhere in Ireland for some time - she told me somewhen before he came home. Whom I knew personally from some time before.

Someone had told him, that his girlfriend was betraying him. So he wrote something into my guestbook, which I didn’t consider as friendly - and didn’t understand, as I hadn’t "touched" his girlfriend, anyways. Well, I didn’t have his phone number or address here, so phoned *her*. Asked her, what had happened there. At this point, I had a melody in my head, anouncing the "Soap Opera of Tangalur". For one week, my guestbook got a hit rate I had never dreamed of, the greatest flame war on earth, and all without any action taken from me. Except telling her...

...which ended in her splitting up with her boyfriend. Which did NOT end in us becoming a couple. Instead, after a while - we keept on dating as before - I must have done something wrong. Because, all of a sudden, she ceased any contact. Didn’t even greet me, or look at me, just ignored me. I started another war of roses - against noone except my ignorance. Until she found a new relationship, with another not-really-close friend of mine. And there I sat, with the impression that history will repeat itself. Knowing, that I live in the perfect Soap Opera. And still, since not yet one year, trying to lead a war of roses without anyone involved knowing of.

A few days ago, at this very same Café in the same situation, I met another girl, sitting on the same couch, watching a movie... 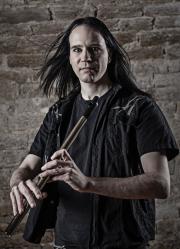